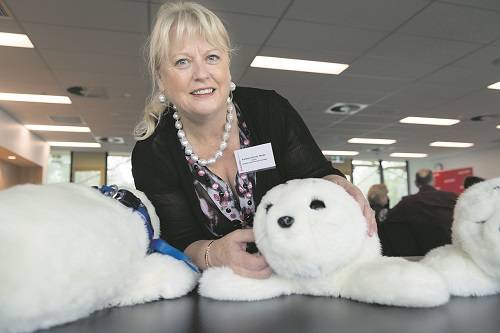 Sealed and delivered – Wendy Moyle with Paro the companion robot, which responds to touch and the sound of its name.

Passionate dementia researcher Wendy Moyle is convinced robots can improve care for Aust­ralians living in aged care: what she has to do is dispel some biases first.

Passionate dementia researcher Wendy Moyle is convinced robots can improve care for Aust­ralians living in aged care: what she has to do is dispel some biases first.

“The reality is that as the population ages, there will be fewer workers,” said Professor Moyle, of Griffith University.

“There are some tasks that can be done (by robotics) – and, I suggest, done better – allowing more time for personal communication and entertainment provided by humans.

She and her team are conducting one of the largest companion robotic studies in the world, a $1 million project involving 390 residents with dementia in 33 south-eastern Queensland aged care facilities.

The study involves Paro, a Japanese-developed companion robot that looks like a baby harp seal and weighs about the same as a newborn baby.

Unlike a soft toy, it responds to touch and the sound of its name.

The team is measuring the difference in mood, anxiety, sleep and quality of life between those spending time with Paro and those with a soft toy or a traditional robot.

Professor Moyle is also the lead researcher behind the use of Telepresence robots, human-sized “Skype on wheels” enabling an operator to connect with a person or group anywhere in the world and to see each other and their surroundings.

In an Australian first, Griffith recently opened its Social and Assistive Technology Laboratory, a place for older people, their carers, care providers and academics to share experiences of ageing, dementia, technology and robotics.